To Apple’s credit, this is the easiest 12.9-inch iPad to actually hold and use. It certainly doesn’t hurt that its designers trimmed a full inch off the big Pro’s height and shaved around two-tenths of a pound off the body. That might not sound like a huge difference, but because Apple concentrated the tablet’s weight into a smaller footprint, this iPad feels much easier to manage. I’ve spent the past week using the Pro to work on this review, read on subways, watch election results while nursing a fever in bed, and more — in short, I’ve been trying to rely on it as much as possible, and it never felt as cumbersome or unwieldy as its predecessors. If nothing else, Apple has succeeded in building a big tablet that doesn’t really feel like one.

And then there’s the screen. The 12.9-inch “Liquid Retina” display has the same 2,732 x 2,048 resolution as earlier models did, and it’s about as nice a screen as you’ll find on a tablet right now. That said, I’m pretty sure at least a few of you are disappointed that Apple didn’t embrace OLED panels here the way it did in its recent flagship iPhones. That was almost certainly a decision made to keep the iPad Pro’s cost at least somewhat manageable, and honestly, the decision doesn’t come with many downsides.

This LCD is capable of rendering bright, beautiful colors, to the point where I’ve found it gives the iPhone XS’s OLED screen a run for its money. Even better, the display can (once again) refresh at a rate of up to 120Hz, so on-screen motion tends to look remarkably smooth. Apple calls this its ProMotion display technology, and it’s just as impressive now as it was when I first tested it — if you’re not careful, it’ll spoil nearly every other tablet screen for you. My gripes here are few: the screen’s pixel density technically falls short of that on devices like the iPhone XS and XS Max, but that’s less troublesome than the fact that the screen is a veritable fingerprint magnet.

It’s also worth noting that, for now at least, most of the apps I’ve tested don’t actually fill the entire screen. Many of them get pretty close by displaying thin black bars at the top and bottom of the display where the time, date, and gesture bar live, and I’d imagine fixing this in an update wouldn’t be too difficult. Others, however, are much worse. Spotify is a great example (or a terrible one, depending on how you look at it). In addition to those top and bottom bars, the Spotify app window is also flanked on the left and right by black bars. These sorts of apps effectively double the size of the bezels, making your sleek new iPad look a bit like an older model. Here’s hoping these all get fixed, and soon.

Rounding out the iPad’s new design is a pair of cameras. The 7-megapixel front-facing TrueDepth camera (plus the extra bits that power Face ID) was pulled straight out of the iPhone XS and wedged above the iPad’s screen. Or is it squeezed next to the screen? It’s kind of hard to say this year. Apple design chief Jony Ive said in an interview with The Independent that the new Pro “doesn’t have an orientation.” That is to say, now that Face ID is here and the home button is gone, you can pick up and use the iPad any which way you need to.

In practice, that’s not entirely true, since you have to make sure not to obscure the front camera when grabbing the iPad, but I’ve is mostly right. It doesn’t hurt that this second-gen Face ID sensor is very fast at recognizing the person in front of it, even if it’s looking at them from below or at a weird angle. 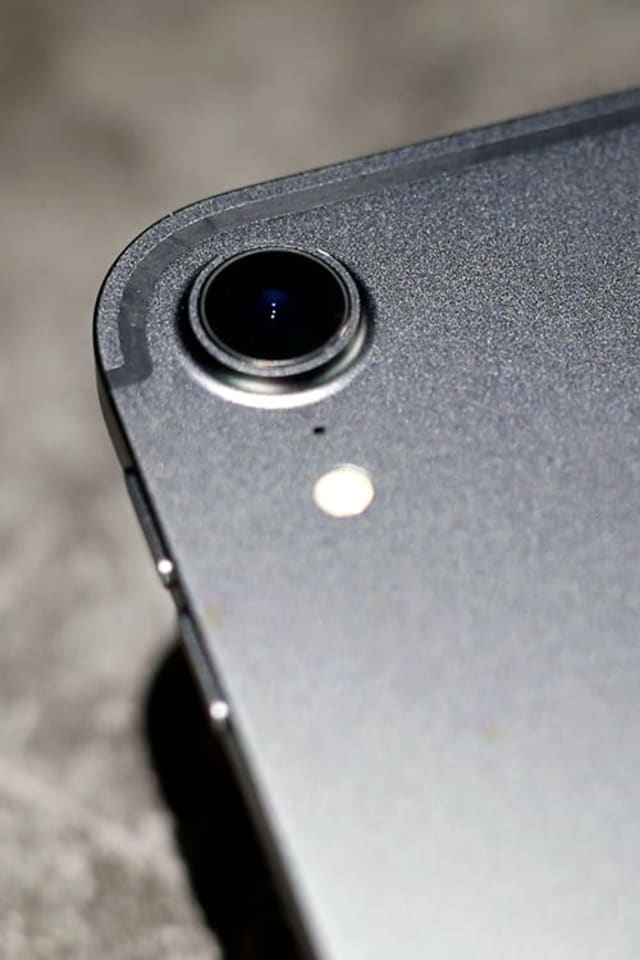 The iPad’s 12-megapixel rear camera, meanwhile, is perfectly adequate. I fully expected Apple to use the same wide-angle camera we tested in this year’s iPhone XS and XR, but nope! Because this iPad is so thin, Apple had to use a new, more compact sensor to fit behind the display. As a result, the photos here aren’t quite as good as ones captured with any of Apple’s newest phones, but honestly, when was the last time you took a photo with an iPad? The camera’s quality is solid enough that I wouldn’t call it an afterthought, but Apple clearly had different priorities here. There’s no portrait mode, for instance, an omission that’s especially weird, since the iPhone X R proved Apple could pull off bokeh-filled portrait shots with a single rear camera. The one other caveat is that the rear camera juts out of the iPad’s back, as opposed to sitting flush like it did on earlier models. You’d think this would lead to some wobbling or instability when the iPad is laid flat on a table, but I’ve never had a problem there. Available online in Nigeria at Obejor.com your number one online store.